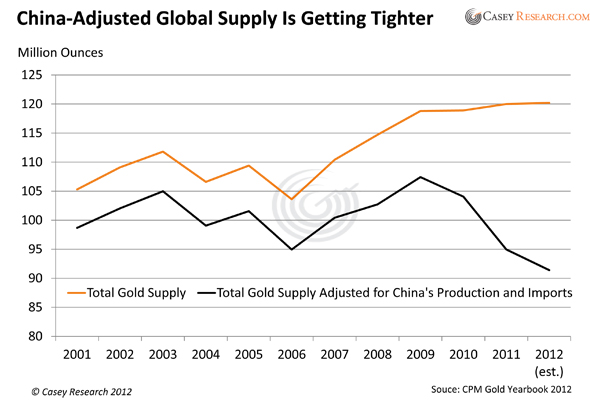 Another Joe December 5, 2012 no Comments

A number of market analysts and gold-industry insiders are warning about a possible shortage of gold supply. Barrick CEO Jamie Sokalsky recently stated that since gold production is inelastic (i.e., insensitive to price changes) there will be a very limited increase in supply from gold producers, even during sharp increases in the gold price. Rick Rule, a billionaire and avid gold investor, pointed out that while we’re seeing spectacular demand, a number of issues will make supply very tight in the future, especially among retailers.

The issues facing gold miners are well known: depletion of existing mines, lower grades, and fewer new discoveries – especially big and rich ones. Further, miners face increased calls for nationalization, demands from workers for higher pay or from local communities for better infrastructure, and – of course – environmental concerns. Many mining company representatives say it’s getting harder to not only find large deposits but to get those deposits into production. Some estimate it now takes twice as long as to go from discovery to production vs. a decade ago.

These warnings aren’t always taken seriously, especially by those who see that mine production has been growing. At first glance, they’re correct – but only if you look at the short-term picture. The following chart shows that global mine production has indeed been rising since 2008. From 2009 through 2011, output rose an average of 3.9% per year. However, we know that a good chunk of this increase is due to China, and upon excluding its output, you can see how it alters the global picture. What’s important about China’s production is that unlike most other countries, it doesn’t reach the world market, since China doesn’t export gold.

Further, while some point to the growth in production since 2008, output is still 12.8% below the year 2000 level. And there are reasons to believe the gap between global mine production vs. mine production excluding China could widen. MarketWatch reports that China’s Ministry of Industry and Information Technology has said that China wants domestic gold production to reach 14.5 million ounces by 2015, an increase of approximately 25% over last year’s levels. Given that what’s produced in the country stays in the country (where there is escalating domestic consumption), a “widening of the fundamental market shortage,” as per the MarketWatch article, seems almost certain.

Since global production is lower without China’s production included, we decided to examine total supply (mine production plus scrap), backing out Chinese production and adjusting for Chinese gold imports. How much gold is left for the rest of the world after the Chinese take what they want? The contrast surprised even us. Another trend to take in to account is China’s growing interest in natural resources – basic materials, energy, and others. What gets underreported, however, is that the Chinese are also purchasing gold mines. Here is a list of Chinese gold-mining acquisitions over the last year:

The facts can’t be denied: China is on the hunt for gold deposits and mines. These gold-focused deals will add more ounces to the country’s pool of gold assets. Just the three most recent acquisitions (Focus Minerals, Norton Gold Fields, and Inter-Citic Minerals) contain 12.5 million ounces of gold resources.

As the Chinese have publicly stated before, acquiring large amounts of gold on the open market would almost certainly drive prices higher, as well as trigger greater volatility. One way to get around that is to purchase deposits that either are or will be producing the precious metal, allowing them to accumulate the gold before it hits the international market – and at cheaper prices than spot. In spite of the gargantuan quantity flowing through Hong Kong, it’s entirely possible that we are underestimating China’s demand.

In light of all this, it seems clear that concerns about future supply are real.

There are some clear implications for us investors:

Supply will get tighter. It’s not because there’s a lack of metal in the ground. It’s increasingly critical to ask whether any given deposit is economically viable, politically feasible, and ecologically agreeable. Despite increased budgets on exploration (last year the gold industry spent a record $8 billion) and despite a 570%+ increase in the gold price since 2001, discovery rates are still decreasing. It’s clear that the gold industry is unable to grow supply to a significant degree in spite of increased spending and increasing margins.

Chinese production won’t show up at your local dealer. The country is keeping it all. When you read about growing global supply, you have to subtract what China produces and imports to determine what’s really available. As Chinese appetite continues to grow, this could become a front-and-center issue.

China will likely cause an even bigger imbalance. As our research shows, China’s share of supply is increasing, while the rest of the world’s is decreasing. Meanwhile, there is every reason to believe it will continue to acquire gold-mining assets. We think positioning yourself in likely takeover targets is a wise speculation (whether China is the buyer or not). That’s exactly what many of us at Casey Research are doing.

A public rush for metal will empty the shelves. There’s no rush like a gold rush, and if we enter a mania period, bullion will be hard to come by at retail outlets. Why wait for that? A mania is when you want to sell.

Our advice is simple: make sure your personal gold reserves are in place before a gold supply crunch becomes reality. And for leverage on the likely resulting mania, build a portfolio of the best of the best gold stocks.