Silver – A Ship We missed… or Did We?

We’ve mentioned ratios here before in our ponderings regarding the true money of the world. It’s a simple equation that anyone can watch in their consideration regarding whether or not they should be in silver or gold. Then there are different ideas about what would be the best trade in relation to the ratios.

To figure out the ratio all one has to do is divide the price of gold (AU) by the price of silver (AG). Historically this ratio has been around 16/1. However, for reasons beyond Another Joe’s understanding, in recent years the ratio has changed dramatically, moving as high as 80/1 about three years ago. Of course, even 80/1 is a bit short of the 100/1 high of February 91, but still higher than even 20 year averages. In fact, during the past 35 years the historical average of 16/1 has only been approached once, in January, 1980, when it bottomed at 17/1. 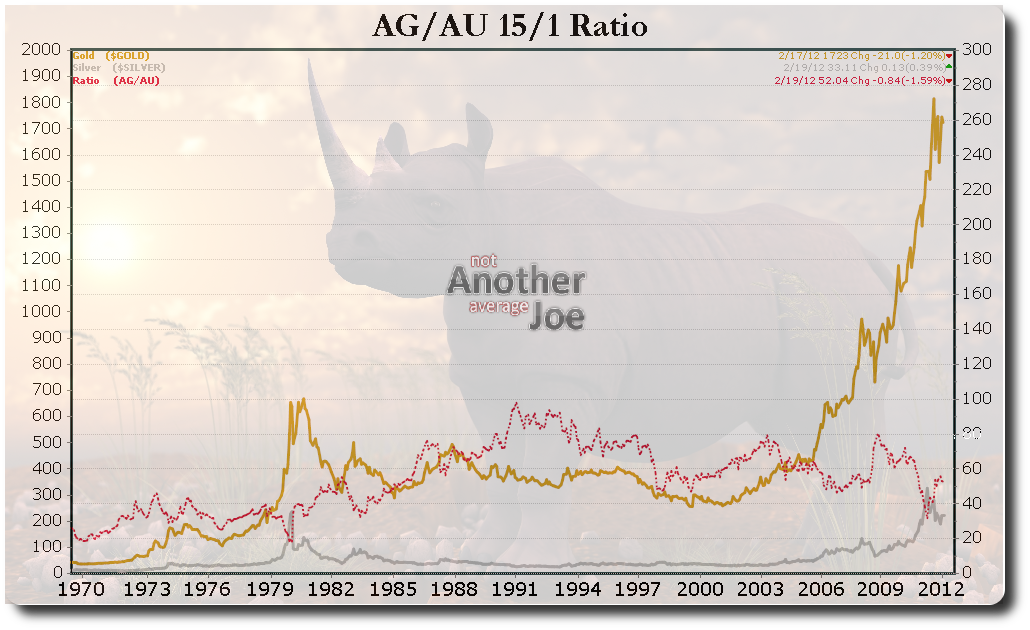 So the idea is to buy some silver bullion, pick a ratio that your convinced is a good ratio to begin trading, then move from silver to gold. Perhaps one would move 25% of their silver to gold when the ratio is 40/1, another 25% at 30/1, 25% at 20/1 and hold 25% just in case it dips lower. Then, as ratios move up the opportunity presents itself to move back into silver. Ratios might begin at 30 or 40/1, again in increments, holding a little gold just in case the ratio moved up above 80/1 again. These are just for consideration. Whether this sort of trading and what ratios to use are subject to your own philosophy, goals and comfort level. Perhaps you couldn’t do this sort of investing. Maybe your ratios would be lower or higher. All of this can be very subjective and only hindsight affords 20/20 vision (though even then misinformation can alter true perceptions).

Early in Another Joe’s metals’ investment ride bullion was the focus, with a few semi-numismatic gold pieces thrown in for fun. The idea was to watch the ratios, spikes and dips in an effort to trade whenever the market offered opportunities. Generally, metals move rather slowly so opportunities don’t come along particularly often (today’s volatility being an exception). Sitting pretty with some bags of junk silver the ratio was watched eagerly for an opportunity to trade for the yellow stuff. In early 1998 opportunity knocked. Berkshire Hathaway Inc purchased a large quantity of silver, culminating on Jan12, 1998. It was such a large quantity that it caused some ripples, spiking the silver price for a little while. The ratio dropped to around 45/1 at this time. What to do? The spike in silver was a unique event. We knew that. But what would happen and what was the best choice?

Well, we didn’t have much to work with, but we did want to capitalize on what we did have, so we sold a few bags of silver and considered our options. Our adviser recommended Morgan rolls. The rolls are original and uncirculated and really hadn’t done much over the years. Their languishing looked like opportunity, so we bought. Then we waited… and waited… and waited.

As the price of silver rose over the past ten years we often wondered about our position. The rolls just didn’t move with the spot price. In fact, even when silver had risen ten fold, our precious rolls hadn’t even doubled. To say we had missed the boat seemed like an understatement. We didn’t understand. Furthermore, we weren’t sure where to get the answers. We had seen the movement in metals coming and had prepared accordingly. We had followed the advice of experienced traders. For once it seemed we were on the right ship. But as we went by the port it seemed we saw a lovely silver ship dock while we slipped by. It was perplexing. It was aggravating. It was distressing. What’s going on? Is there anything we can do?

Then I read a little snippet in one of the many newsletters we read so often. I can’t remember which one it was, but I remember reading as one of the gurus of PCGS was asked what he thought was a good investment. As I read my heart sank. He was recommending buying old, uncirculated, silver dollars. As he explained it understanding flooded my mind like a tsunami. The price of bullion moves up rather rapidly, but the price of semi-numismatics languishes a little behind. In other words, I was invested at the back end of the bull run. Of course, everyone wants to be on the front end of a bull run. It offers more opportunity. Then, as the bull runs, it begins to pull the semi-numismatics with it. So, for those who understand, investing in bullion first then moving to semi-numismatics later in the game, perhaps when one can find some reasonably close to spot prices, would be a smart play. But Another Joe just didn’t understand in time. And, of course, history doesn’t always parallel in these things, so there are no absolutes. But it all made sense and the evidence lay there before us in a limited number of silver cylinders.

So, it seems we missed the boat. Our position, when silver peaked, was recently about 20% of the bullion position. With recent drops we’re a little closer. Maybe, if the silver price drops enough, it would be worth while to switch back to bullion. With Morgan rolls close to bullion prices already, it’s a tough call. Perhaps if we get around $25/oz for silver, and if the Morgan rolls don’t drop in value, it would be time to pull the trigger. We’re watching for our opportunity with great interest, wondering which ship should we be on.

So, did we miss the boat? Well, yes and no. We bailed from the stock market in the late 90s. The 90s were good to us, increasing our meager holdings through rising markets and the selling of our house. Since then we’ve watched our metals rise in value even as we’ve watched others lose substantial investments. As the stock market rose and fell over the past decade, our holdings have increased steadily, if not too significantly. So, perhaps our big ship didn’t come in. Maybe we can’t hitch a ride on that one in order to maximize the potential of our investments. But we’re confident that we’re still in the right flotilla. And, eventually, it’ll make port and we’ll be the better for it.

Are we saying that stocks are a bad idea. Nope, we wouldn’t say that. Remember, we don’t give advice. We just offer perception and personal observation, with a few facts thrown in for entertainment purposes. Find a good adviser to help you. Don’t get someone who says, “Trust me.” Get someone who wants to teach you the fundamentals of why they advise the way they do. Get many opinions. Study the markets. Once you have a grasp of the fundamentals and begin to build your investment philosophy, concentrate on those investors and advisers who have similar philosophy and vision. And, as always, this includes a strong recommendation to do your own due diligence (dyodd).

A final point to make is that our trust is not in men nor in conventions of the world. We don’t trust in horses or chariots. As the old hymn states, “My hope is built on nothing less than Jesus’ blood and righteousness.” This is where our ultimate trust lies, for richer or poorer. All earthly riches pale in comparison to eternal riches in Christ Jesus. You can’t take that to the bank, but you can take it into eternity.