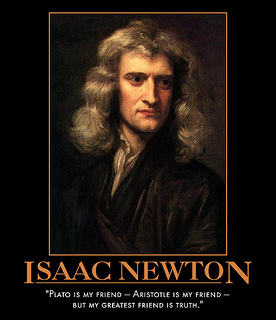 Squatting on the shoulders of midgets

Another Joe December 6, 2012 one Comments

Isaac Newton, the father of classical mechanics and progenitor of nearly every technology we use today, was easily one of the top 10 most influential minds in all of human history…so much so that even Albert Einstein kept a picture of Newton in his study.

Newton’s achievements were so momentous that when he died in 1727, he was buried with the honors normally reserved for a king. His body lay in state for four days at Westminster Abby, and his pallbearers included two dukes, three earls, and the Lord Chancellor.

Yet as accomplished as he was, Newton credited the brilliant scientists and philosophers who came before him, acknowledging that his insights would not have been remotely possible without the foundations laid by great thinkers– Archimedes, da Vinci, Descartes, etc.

In a personal letter to a colleague in 1676, Newton famously remarked “If I have seen further it is by standing on [the] shoulders of giants.”*

No doubt, all great ideas flourish by expanding upon the works of others. Unfortunately, so do terrible ones. And one of the worst ideas in history that continues to play out today is the grand experiment of fiat money.

The idea is simple. Rather than allowing money to be scarce and have intrinsic value, our fiat system grants power to a tiny elite to conjure money out of thin air. Presumably, if the ones in control are smart, honest guys, then everything should be fine.

via Squatting on the shoulders of midgets.